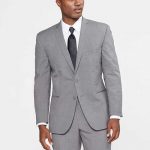 Prom Tuxedos Get on board for Prom 2020!! Like us on Facebook and follow us on Instagram and Twitter for Prom Specials and chances to win complete Tuxedo rentals . 3 valley location to Suit you. Not the biggest, just the best. Come on in we make deals and work with every budget. Super Saver Tux $79, Classic Collection $99 over 10 styles to choose from Complete, Premier Collection $149 over 20 to choose from. Plus Tax and Waiver on all rentals.

“Tuxedo’s for less…Your Tux
has pockets for a reason”

Tuxedos and Dresses: The History of Prom

Proms are a fun and exciting night where teenagers dressed to the nines in elegant dresses and Prom Tuxedo’s, ride in limousines and are allowed to break curfew. It may only last one night but the memories from that one magical night will last a lifetime. Despite the millions of teenagers that have attended prom, few of them know the actual history of this memorable event.

The History of Prom. Prom is short for promenade, which is a formal parading of guests at a party. It can be traced back to 19th century co-ed banquets that universities would hold for the graduating class. During these banquets, young men would don their Prom Tuxedo’s, while young ladies got dolled up in big fluffy dresses.As the years passed, proms where pushed back to younger generations and, by the 1940s, the high school dance we know today had taken over the term prom. During the postwar economy of the 1950s, high schools decided to hold proms in at country clubs or hotels. In fact, the daughter of President Ford held her high school prom at the White House. Now-a-days, proms are held in various locations with high school gymnasium being the most common place to hold the event.The Story Behind the TuxedoThe history behind the tuxedo has several theories; however, one of the most popular beliefs credits Pierre Lorillard IV as the inventor of the tuxedo. Mr. Lorillard was a wealthy tobacco manufacturer in the 19th century who also owned thoroughbred racehorses. He and his family lived in a residential colony known as Tuxedo Park, which was about 40 miles from New York City. The residents of Tuxedo Park established their own high-class social organization and called it the Tuxedo Club. In October 1886, the Tuxedo Club held its first Autumn Ball. During this time, men’s formal fashion consisted of a white tie and long tailcoat. Pierre Lorillard IV, however, commissioned a tailless black jacket for the event. Pierre’s didn’t wear the tailless jacket. His son Griswold Lorillard and some of his friends, however, wore the outfit to the ball and were instantly admired as a stunning fashion statement. The much-coveted outfit was copied, and gentlemen began wearing the tuxedo — named for the town it originated from — when necessary. Since its invention, the tuxedo has been the go-to men’s formal outfit for formal occasions. Prom Tuxedos have changed a bit since their introduction and are now available in various cuts, colors and style, which give the teenager a few options to customize their outfit. However, the vest that is worn with the tuxedo usually matches the prom dress of the young man’s date. Young men looking for formal wear can rent their tux at Phoenix tuxedo shops. Visit one of our Rose Tuxedo shops, Phoenix, Mesa and Northwest Phoenix.